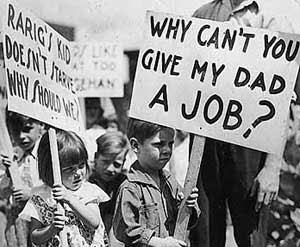 The most dramatic economic shock that the world has ever known began on October 24, 1929, also known as “Black Thursday”. After years of large-scale speculations, with millions of investors borrowing money to chase the dream of easy riches and hundreds of banks willing to accept stocks as collateral, stock prices far exceeded the companies’ actual productivity, and the bubble eventually burst. The collapse of the stock exchange continued through October 29 (“Black Tuesday”) and, during the following days and weeks, countless investors found themselves suddenly broke, while hundreds of banks were forced to default on their loans.

By the early 1940s, the Dow Jones stock prices were still approximately 75 percent below the 1929 peak, a level which was only reached again in 1955, and the number of banks in operation almost halved over the next four years driving thousands of business owners to the wall, as the banks called in loans to stay afloat. Furthermore, because the banking system could no longer supply the necessary liquidity, new business enterprises could not be undertaken and millions of workers lost their jobs with little hope of regaining them in the near future. In 1933 and 1934, one half of the total workforce was jobless or underemployed. To make things worse, home mortgages and loans had produced a huge amount of consumer debt and, while incomes decreased, debts did not. Predictably, consumer spending declined dramatically: between 1929 and 1933 expenses on food and housing went down by more than 40 percent, with crop prices following the same downward path. The crisis of the financial markets had set off a domino reaction.

Unfortunately, the American president Herbert Hoover was a steadfast advocate of laissez-faire principles and believed that the “invisible hand” of the market and the moral fiber of American people would ensure that everything would eventually work out just fine. A rugged individualist and a champion of the values of frugality, hard work, plain life and self-reliance, he was persuaded that the economic Depression could be treated like any clinical depression because the whole problem came down to a large degree to a “a question of fear”. In keeping with the contemporary tendency to manage economic problems by trade measures, Hoover adopted austerity measures and, on June 17, 1930, he signed the Hawley-Smoot Tariff Act, which doubled import duties on selected goods, causing other Western countries, already burdened by war debts and reparations dating back to the Versailles Treaty of 1919, which had ended World War 1, to react by raising their own import tariffs. This provoked a major disruption of world trade, with an overall reduction of about forty percent and widespread unemployment and hardships, especially in those countries whose economy was heavily dependent on international trade. Worse still, the Federal Reserve refused to provide emergy lending to help key banks to at least partially recover from their losses.

Internationally, a combination of high external debt, falling export prices, government fiscal difficulties, and internal banking crises spelt disaster for the world economy. Latin American countries, the most dependent on selling raw materials to industries and therefore the most sensitive to the fluctuations of the American economy, were the first to default on their debts. defaulted in January 1931, in March of the same year, in July, and and in October. was hit in 1931, when several banking crises translated into foreign-exchange and fiscal crises. , , and were forced to default in 1932, followed by and in 1933. Austria’s largest bank, Vienna’s Kreditanstalt, which financed two-thirds of Austrian industrial production and controlled 70 percent of Austrian bank assets, had failed in May 1931, an event which had sent shockwaves across Europe. Depositors rushed to take out their money from banks that were perceived to be in weak financial conditions and, in so doing, they compromised the stability of the entire banking sysyem of several countries. By mid-June many German banks had collapsed. Major Italian banks were rescued by the fascist regime, which corporatized the national economy and started to drift away from international rules and agreements and to shift towards racist and imperialist policies.

One of the main consequences of this chain reaction was that trust in sovereign loans was shattered. The social and political repercussions were catastrophic. Industrial unemployment in the averaged 37.6 percent in 1933, while reached its highest rate at 43.8 percent, the at 22.1, at 23.7, at 28.8, and at 20.4 percent. In more than one fifth of the labour force remained unemployed throughtout the 1930s and even the introduction of important measures of welfare assistance did not help boost the economy. Farmers publicly protested against new immigrants, calling them “the scum of Continental Europe”, “men and women who have behind them a thousand years of ignorance, superstition, anarchy, filth and immorality”. Meanwhile, in the , the penal system became increasingly punitive. More executions were carried out than in any other decade in American history – an average of 167 per year – and there also took place a sharp rise in imprisonment. In point of fact crime rates did not significantly rise, but the mass media popularized the idea that the social order was on the verge of collapse, and generated a “crime wave” frenzy among the public.

By the early 1930s, the economic slump had destabilized the international political order, the erosion of liberal values was at an advanced stage, and welfarist cost-benefit analysis had gained appeal and credibility. Prompted by the need to cut down on public spending and the moral panic generated by the Great Depression, several governments of the most advanced democratic countries lost confidence in the effectiveness of social reforms and undertook programmes for the involuntary sterilization of thousands of citizens. It was argued that, under exceptional circumstances, basic rights could be withheld and that, in order to reduce the burden on the public purse, social services should only be granted to those whose social usefulness and biological capability were past doubt. In the Weimar Republic, the hardest hit by the Depression, this ideological shift produced a radicalisation of medical views on racial hygiene and “euthanasia”.

Trade protectionism, nationalism, and fascism were among the most tragic results of the Depression, which had persuaded international observers that conventional economic policies should be reformed and that national economies needed increased state control. Earlier enthusiasm for internationalism, cosmopolitan law, and international institutions completely disappeared, replaced by the feeling that large-scale conflicts between powers were once again inevitable.

Nationalism, imperialism, militarism, social Darwinism, autarchic protectionism, a centralized economy, corporative statism, a meticulous division of labour, large industrial cartels, and the coordination of transnational economic blocks under the leadership of a few hegemonic powers were the central tenets of fascism and grew in opposition to the pre-Depression world order. Impermeable national and ethnic frontiers were described as a defense mechanism against the evils of globalization and would defuse the threat of global market competition, speculative mobile international financial flows of capital, Bolshevik class struggle and intra-national ethnic conflicts. They would also provide individuals with organic identities, rooted in history and nature, and therefore far more solid (and less free) than the contingent and impalpable identities generated by the dialectics of democracy and by mass consumerism.

A comprehensive scheme of socio-demographic, economic and geo-political reconfiguration of the planet, in open violation of international norms and treatises, was envisioned, which would bring about a hierarchical and standardized systematization of the relationships between peoples, countries, and territories on a relativistic and particularist basis. National sovereignty and ethnic specificities would justify all sorts of abuses. Within this perspective, because no common rule of law could exist, international statutes ceased to be applicable from the moment fascist powers decided not to comply with them. This spelled the end of the international order of the League of Nations and of a model of cosmopolitan law founded on the principles of liberal universalism.

In the Far East, during the 1920s, hundreds of villages in the Chinese hinterland had seen their consumption patterns change dramatically as a consequence of the marketing campaigns of transnational corporations, which employed hundreds of thousands of Chinese peasants. However, the progressive internationalization and connectedness of the Chinese economy meant that it became increasingly vulnerable to trade fluctuations and, when the Depression took place, the entire structure of Chinese agricultural production was hit with unprecedented force and the process of pauperization of the countryside population seemed unstoppable. There followed two major consequences: the strengthening of the Communist Party and a major diaspora of Chinese emigrants seeking a better future abroad.

In Japan, a country which was heavily dependent on foreign trade, unemployment soared, labor disputes became more and more frequent and violent and so did anti-Japanese insurgent movements in Korea and Taiwan. Rural debt forced poor tenant farmers to sell their daughters as prostitutes and thousands of small businesses were gradually absorbed by the zaibatsu, that is, huge financial combines which pushed for more authoritarian and imperialistic policies.

On a global scale, the Depression proved far-reaching because of the degree of interdependency of the world economy and because colonial empires acted as relays for the transmission of its effects from the centre to the periphery. But how did goverments handle this massive crisis?

In the United States, Hoover’s seeming idleness was interpreted by millions of American voters as callousness and the presidential candidate for the Democrats, Franklin D. Roosevelt, who evoked a more interventionist and caring state won a landslide victory in 1932. His presidency will be for ever identified with the New Deal, comprising a series of “Keynesian” relief, recovery and reform measures, in the understanding that “deficits in time of recession help alleviate the downturn.” This program revitalized the economy by reinvigorating mass consumption through deficit spending and restored psychological confidence and people’s trust in the American institutions and in the future by effectively reshaping their expectations.

Sorokin once righlty noticed that calamities tend to expand the scope of governmental regulation of social relationships. Indeed, deficit spending for government-funded public works programmes was successfully used for economic recovery in Social-Democratic Sweden, but also in Nazi Germany, fascist Italy and imperialist Japan. These countries were among the first to overcome the crisis. Instead, in Britain and France, two countries whose currencies were pegged to the Gold Standard, mostly for reasons of national pride, a genuine recovery only began when large scale rearmament was undertaken as a reaction to the National Socialist threat. It is noteworhty that those countries which remained on the Gold Standard fared far worse than those which did not.

In the final analysis, the Depression lasted for about a decade and was aggravated by a steadfast and self-defeating loyalty to the Gold Standard, as well as by increased wealth inequality and financial speculation. It was not brought to an end by the concerted effort of fair-minded and judicious leaders committed to the cause of world prosperity and peace, but by a vast military build-up leading straight into World War 2.

The final question we need to ask is whether a Great Depression could happen again. If a crisis of that magnitude is ever to occur, it is unlikely that it will be triggered by the same factors. The Depression had such a lasting impact on the lives of those who experienced it, that policy makers and analysts have thoroughly canvassed the subject so as to define those steps that governments should or should not take to prevent a repeat. These comprise higher inflation and lower productivity, more social justice, a greater emphasis on employment targets rather than exchange rates, and the protection of farmers.