Slavery and the Constitution 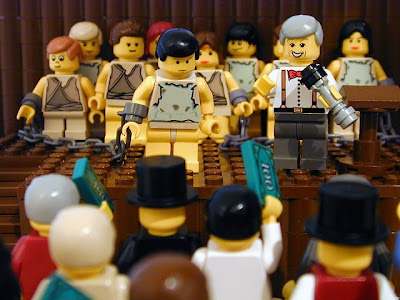 Chattel slavery is the extension of market relations to the human person, as a marketable property and human commodity (res commerciabilis) or legal tender, outside the domain of mutual obligation.

In 1550, Spanish emperor Charles V called a halt to military operations in the , until the status of Native Americans, together with the morality and legality of the Spanish conquest, had been thoroughly debated. A group of theologians and jurists was convoked in , to listen to the arguments of Bartolomé de Las Casas and Juan Ginés de Sepúlveda and settle this question once and for all.

The bull “Sublimis Deus”, issued in 1537 by Pope Paul III, had already clarified the Holy See’s official position on the subject. The Pope condemned slavery and the portrayal of Indians as “dumb brutes created for our service”, incapable of exercising self-government, free will, and rational thinking, and therefore of receiving the message of Christ. Las Casas, elaborating on this bull and on the writings of Francisco de Vitoria, a Dominican professor at the prestigious , decried the barbarity of Spaniards by contrasting it with the meekness, humbleness and good-heartedness of the Indians. Sustained by an unswerving faith in the essential unity of humankind and by his conviction that a commitment to global justice was a moral imperative, he argued that Indians were fully capable of governing themselves and were entitled to certain basic rights, regardless of the nature of their practices and beliefs, which should anyhow be understood from an indigenous point of view.

Sepúlveda, who knew very little of the Spanish colonial subjects, drew on the doctrine of natural law and on pragmatic realism to marshal most of the arguments which would be later deployed by American anti-abolitionists. He explained that, given their innate physical and intellectual inferiority, Indians should be assimilated to Aristotle’s “natural slaves.” In consequence of their being ruled by passions rather than reason, Indians were born to be slave. As men ruled over women, and adults ruled over children, so inferior races should be subordinated to the will of superior races. This allowed for the enslavement of indigenous people and Africans.

Puritan settlers in took the same stance as Sepúlveda, and resorted to natural laws to validate the claim that religious conversion could not change the legal status of African slaves or Indians. Their status would instead be anchored to biological, and thus inalterable, attributes, which justified hereditary slavery and perpetual bondage for African-Americans and Native Americans. Because their status was equivalent to that of domestic animals or infants, slaves enjoyed no legal protection: only their commercial value shielded them from the structural violence of a society that regarded them as less than human. Slavery was described as a necessary evil, not the result of greed, callousness, and “human parasitism.”

In 1700, Indians accounted for one fourth of all South Carolina’s slaves and in 1790, when the Naturalization Act was introduced, which restricted American citizenship to “free white persons,” nearly one third of the people living in the American South were black slaves. The paradox of a society fighting for freedom and for pre-social individual rights and granting juridical personality to corporations, ships and states, but at the same time tolerating that 20 percent of the population was subject to chattel slavery, is epitomized by John Adams’ protest against the English yoke, in 1765: “We won’t be their Negroes.”

Even though they may have expressed doubts about the morality of slave ownership, George Washington, James Madison, and Thomas Jefferson profited from it and were evidently prepared to live with it. When southern delegates refused to support a government and a Constitution hostile to their economic and political interests, northern delegates sought all sorts of compromises to avoid conflict. Abolitionist William Lloyd Garrison called the final draft of the Constitution “a covenant with death, and an agreement with hell.” Indeed, consensus was bought at the highest price: the constitutional sanctioning of slavery, an institution irreconcilable with the libertarian spirit of the Constitution, but not with its protection and promotion of private property and enterprise.

Also, the “Fugitive slave clause” of Article IV of the Constitution prevented fugitive slaves who had reached an abolitionist state from being freed. What is more, the southern delegates managed to persuade their northern equivalents to include slaves in the determination of the apportionment of the members of the House of Representatives. Irrespective of their status as property, each slave would be counted as three-fifths of a free man, thus greatly augmenting the political power of the Southern States. As a result, twelve out of the first sixteenth American presidents were Southern slaveholders although, by 1804, slavery had been substantially abolished in the Northern states, where an inclusive civic nationalism had taken root.

Thus, for all intents and purposes, it may be said that the American Constitution protected the peculiar institution and the Southern caste society until the outbreak of the Civil War. In Dred Scott v. Sandford 60 U.S. (19 How.) 393 (1857), Roger Brooke Taney (1777-1864), Chief Justice from 1836 until his death in Catholic and a former slave-owner, played a significant role in furthering the sectional interests of those who interpreted the meaning of the Constitution as precluding the federal government from applying restrictions to the citizens’ right to property. This would include the property of slaves, which was protected by the due process clause of the Fifth Amendment. Echoing Sepulveda’s arguments, he maintained that, in 1787, blacks were not expected to become citizens and to exercise the associated rights, for they were considered as “a subordinate and inferior class of beings, who had been subjugated by the dominant race, and, whether emancipated or not, yet remained subject to their authority, and had no rights or privileges but such as those who held the power and the government might choose to grant them.” This infamous, though formally and historically not incongruous, decision, which foreshadowed a future Supreme Court ruling nullifying the abolition of slavery in the North, strengthened the resolve of abolitionists. Eight years and over 600,000 casualties afterwards, institutional racial slavery and involuntary servitude officially ended with the passage of the Thirteenth Amendment.