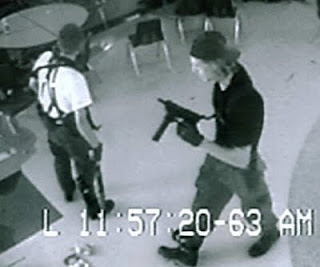 On Tuesday, April 20, 1999, 12 students and a teacher were killed at , near . 24 others were injured, three of them while seeking to escape. The official report was released on May 15, 2000, explaining that two students, by the name of Eric Harris and Dylan Klebold, acting alone, engaged in a killing spree before committing suicide.

However, a closer analysis of local news coverage and official reports reveals that the issue is far more complex than what was first thought and we are left with more questions than answers. To begin with, numerous eye-witnesses reported to the Denver Post, to the Denver Rocky Mountain News and to the FBI that the shooting went on for two to four hours, whereas the official report states that “it ended after 45 minutes.” Secondly, it is not clear how two teenagers alone could have placed throughout the high school “95 homemade explosive devices”, including two 20-pound propane tank-bombs, all at the same time and unnoticed, while carrying four shotguns and 9mm handguns and plenty of ammunitions. Unfortunately, a custodian was replacing the security camera video tape at precisely then time when Harris and Klebold entered the cafeteria. Still, over fifty eye and ear witnesses provided evidence that five to eight shooters were involved, and some of them have identified by name two other participants, members of the infamous, so-called Trenchcoat Mafia – ostensibly “a group of disgruntled Goths.” Even the reasons given for the killing spree, namely the intense and bitter rivalry between jock culture and goth culture, leave much to be desired, if one considers that Harris and Klebold shot randomly and planned to blow up the entire school, hoping to kill over 500 people, in an act of domestic terrorism that would “outdo” what Timothy McVeigh and Terry Nichols did in Oklahoma City, almost exactly four years earlier, on April 19, 1995. The two murderous students also wanted to hijack an airplane at Denver International Airport and, of all things, slam it into a skyscraper.

Based on the available data, journalist Dave Cullen has concluded that Harris fits the profile of the psychopath, that is, a person devoid of empathy, authoritarian, ego-maniac, manipulative, predatorial and lacking feelings of remorse or guilt. Instead, Klebold resembles more closely the angry, depressive and introvert suicidal type. It is nevertheless always important to warn readers against the logical fallacy of psychological reductionism in the study of extreme behavior. Psychologists have pointed out that Harris did not display several of the traits typically associated with a psychopath, and it is equally possible that, as victims of bullying, they were mainly motivated by an unquenchable desire to take revenge and to “kickstart a revolution” of oppressed students as themselves, as they declared in the videos they made before conducting the assault. This would be more in line with political terrorism. Incidentally, the date of the rampage coincided with Adolf Hitler's birthday and Harris was reportedly obsessed with Nazi Germany memorabilia, something that might corroborate the suggestion that, with their avenger attitude, they sought justice by destroying the people and institutions they held responsible for their oppression. What we can infer from reading his diary is that Harris was indeed enraged with jocks and humanity in general: “Everyone is always making fun of me because of how I look, how fucking weak I am, and shit, well I will get you all back: ultimate fucking revenge here”.

Yet bullying is common and school shootings are relatively infrequent. This means that there are no neat, exhaustive explanations for what happened that day and we are forced to confine ourselves to tentative observations, subject to revision. Constantly subjected to gay-baiting and to a total desecration of their masculine ideals in a hypermasculinity-focused environment, Harris and Klebold might have been overly concerned about the danger of being exposed as fallible males. It is possible that they eventually resorted to violence to prove their manhood and thereby heal the narcissistic wound they had suffered. This kind of violence could stem, at least in part, from a worldview in which vigorous antagonism and the desire to seize, exploit and vitalistically put oneself above morality are praised as virtues instead of being lambasted as malignant vices. If so, the shooters could be seen as thoughtless, ideological creatures, pushed by aesthetically and psychologically pleasant but seriously misguided and intoxicating fictions of masculine purity, authenticity and integrity to overcome their perhaps congenitally weak inhibitions, making them immune to moral considerations.

Kass, Jeff. Columbine: A True Crime Story, a Victim, the Killers and the Nation's Search for Answers. : Press, 2009.

On April 16, 2007 the campus of Virginia Polytechnic Institute, in , witnessed the death of 32 people in two separate attacks, taking place approximately two hours apart. The shooter, 23-year-old Korean-American Cho Seung-Hui, a senior English major at Virginia Tech, also wounded 25 others before turning one of his guns against himself and taking his own life.

It is believed that Cho first killed two students in a university dormitory and then, prior to the final, methodical execution – the surviving witnesses stated that his expression was emotionless and blank, very serious but very calm, and that he did not utter a single word – he went back to his room, assembled a package containing 27 video clips, 43 stills, and an 1,800-word statement delivered in an eerily monotone voice, and mailed it to NBC. During those two, critical hours, no warning was issued to the staff and the other students. In his pre-taped confession, Cho, who arrived in the as an eight-year-old boy from in 1992, railed against hedonism, Christianity and trust funds, and lamented that “this didn't have to happen…You had a hundred billion chances and ways to have avoided today… But you decided to spill my blood. You forced me into a corner and gave me only one option. The decision was yours. Now you have blood on your hands that will never wash off.”

Schoolmates and teachers described Cho as a “loner”, a “weirdo” who ate by himself, refused to engage in any meaningful conversation and wrote “morbid and grotesque” plays, “filled with violence”. When asked to write his name on the sign-in sheet, he wrote a question mark. He was bullied and stalked female students, until he was directed to counseling. However, his mental condition gradually deteriorated. He claimed his girlfriend was a gorgeous extraterrestrial named Jelly, who called him Spanky. He was the only one who could see her. During a Thanksgiving break he rang one of his suitemates, Andy Koch, to tell him that he was vacationing with Vladimir Putin in . There is sufficient evidence to indicate that he suffered from psychosis, most likely a paranoid delusional disorder. To this we could add his vulnerability to a cultural climate encouraging cynical, nihilistic and misanthropic thinking. It appears, indeed, that, like most “school shooters”, he was at war with humanity and almost pressured to exhibit a great deal of mean-spirited toughness, spurning any significant moral link with other people. Spiraling into a cycle of self- deprecation, these students cannot help degrading other persons all the more and, in order to counter a nagging feeling of powerlessness and re-assert their significance, they resort to violence. This seems to be a common characteristic of all these shooters: violence as a compensation mechanism for their lack of self-worth. Unfortunately, a common trait of school bullies is a tendency to underestimate the effects of their abusing behavior. The concurrence of these two propensities may partly account for this otherwise senseless act of violence.