Is Dick Cheney a hunter of human beings? 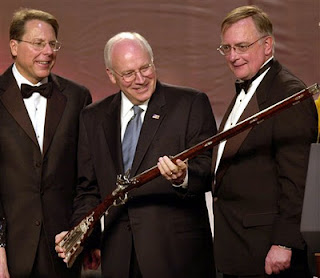 "Incidente di caccia, Cheney imbarazza Bush. La Casa Bianca ha tenuto la notizia nascosta per un giorno. L’amico ferito è ancora ricoverato: ieri ha avuto un infarto per un pallino di piombo nel cuore. Il vicepresidente accusato di voler insabbiare il caso".
http://www.corriere.it/Primo_Piano/Esteri/2006/02_Febbraio/15/caretto.shtml
"Questions have been raised regarding the shooting, even as Kenedy County Sheriff's Office documents support the official story by Cheney and his party. Recreations of the incident were enacted by George Gongora and John Metz, a photographer and producer respectively for the Corpus Christi Caller-Times. Also a hunter re-created it according to the Whidbey News Times. A simulation using many different targets and distances is. All tests seemed to prove that the distance was much closer than the 90 feet (27 m) claimed. Many familiar with quail hunting have also argued that the range was closer, while others, such as forensic expert Jon Nordby, confirm the plausibility of the official reports. […]. The Secret Service is reported to have said that they gave notice to the Sheriff about 1 hour after the shooting, which would put the time of the shooting at approximately 4:40 p.m., 60-90 minutes before the entire hunting party's recollection".
http://en.wikipedia.org/wiki/Dick_Cheney_hunting_incident
*****
“Martin Bormann Jr., the son of Hitler’s trusted secretary…enjoyed the run of the Berghof, Hitler’s mountain retreat. Fourteen years old in 1944, he was, as Gitta Sereny tells us, “a passionate young Nazi, immensely proud of his ‘strict but just’ father and of his Fuehrer”. One holiday afternoon he, his mother and his younger sister were invited to afternoon tea by Himmler’s longtime mistress, Hedwig Potthast. Neither she nor Himmler had been fully admitted to Hitler’s domestic circle, but they had comfortably installed themselves close by the Berghof, and she was eager to show off her new house. After the chocolate and cake, she told the children she would show them something interesting, a “special collection” Himmler kept upstairs in the attic, which had become his den. There, the adult Martin remembered, they saw “tables and chairs made out of parts of human bodies. There was a chair…the seat was a human pelvis, the legs human legs – on human feet”. Potthast then displayed one of a stack of copies of Mein Kampf. The covers, she told them, had been made by prisoners in Dachau from human skin – special skin, the Rückenhaut, the skin of the back. The children fled down the stairs, closely followed by their mother”.
Inga Clendinnern, "Reading the Holocaust", Cambridge: Cambridge University Press, 1999, p. 94.
Pubblicato da Unknown a 10:15