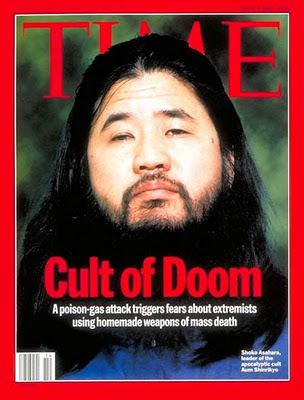 In the spring of 1995, the reportedly safest country in the world was shocked by the revelation that the perpetrators of a terrorist attack against Tokyo’s subway which killed 12 and injured approximately five thousand people were talented Japanese students mesmerized by a hodgepodge of Christian and Buddhist millennialism (the belief that a Golden age is about to dawn), Vajrayana tantric techniques, Taoist beliefs in cycles of cosmic recurrence, and Hindu notion of destruction and rebirth, with bits of Nostradamus thrown in. Many found it hard to believe that the highest ranks of Aum-Shinrikyo, the organization that carried out the attack, comprised several relatively young scientists and doctors who, far from simply going along with their guru’s instructions, actually pressed for the adoption of extreme measures towards the “final solution” of all Japanese plights, that is to say, the obliteration of government agencies. The weapon of choice was sarin gas, a cheap and simple chemical developed in Nazi Germany in 1938 and used by Saddam Hussein in the war against Iran.
The man behind all this, Shoko Ashara, was the embodiment of the “banality of evil,” in the sense that Hannah Arendt uses this expression in a letter to the philosopher and historian Gershom Scholem. She argues that “evil is never radical…it is only extreme,…it possesses neither depth nor any demonic dimension…It spreads like a fungus on the surface….Thought tries to reach some depth, to go to the roots, and the moment it concerns itself with evil, it is frustrated because there is nothing. That is its banality. Only the Good has depth and can be radical” (Arendt, 1964).
The Japanese media made an inaccurate portrayal of this terrorist group and concealed the dullness of their worldview, while focusing on an equally trite juxtaposition of “good” and “evil,” “sanity” and “madness,” and “health” and “disease.”
Born as Chizuo Matsumoto in Kyushu in 1955, Asahara suffered from impaired vision due to congenital glaucoma, and was sent to a school for the blind. There, he bullied his blind schoolmates and sought to create a milieu that he could wholly control. He confided to his closest friends his plan to become the Japanese Prime Minister. Then he would set up his own “robot kingdom.”
When he was not prey to his megalomania, Asahara aspired to become a doctor. But he flunked the entrance exams at Tokyo University, and resigned himself to earn his living as an acupuncturist and a healer. He soon became aware that he could not cure his patients through either the Western or the Chinese medical tradition, and gradually turned into an obsessively religious person. When his business failed, he made a trip to India in 1986, as he was determined to attain enlightenment. Later, he claimed he had gained a considerable level of sanctity and command of his magical powers, changed his name to Asahara Shoko, and founded a new religion, christening his sect “Aum Shinri-kyō” – from Aum, “powers for destruction and creation in the universe” and Shinrikyō, “teaching of the supreme truth” –. Approximately 40,000 Japanese and Russians flocked round him to learn his synthesis of Buddhism, Taoism, Hinduism, and biblical scriptures. Like Joseph Goebbels, who in his semi-autobiographical novel, Michael, published in 1929, submitted that “it is almost immaterial what we believe in, so long as we believe in something,” Asahara selectively assembled all that could appeal to young educated Japanese of the 1990s and to himself.
In the course of time his teaching changed tune, shifting towards a more radicalized sectarianism. Asahara warned his disciples of an imminent Armageddon and prophesied that Pluto’s entry into Sagittarius in January 1995 would have catastrophic consequences. The January 17, 1995 disastrous Kobe earthquake strengthened the resolve of his followers. He then inaugurated a segregate community on the slopes of Mt. Fuji, where his ascendancy over his followers increased inexorably. Aum-Shinrikyo initially sought to develop forms of therapeutic treatment aimed at the spiritual salvation of psychologically and physically sick individuals. Over time, however, as Asahara realized that, outside the sect, nobody took him seriously, Mahayana Buddhism, which aimed not only at personal salvation but at the salvation of the whole of humankind, together with messianic and millennial expectations, took the upper hand. The utopian plan to use medicine and science to redeem the world and create a harmonious and peaceful society was falling apart, and the sect’s leaders grew restless and slightly paranoid. If Japanese were indifferent to Asahara’s enlightened leadership, he would make them take notice. As is often the case with utopias, Aum’s goal of achieving total liberation and perfection called for the subjugation and purposeful deception of individuals, who were regarded as essentially incompetent and selfish. When ordinary citizens, by ignoring his call for action, showed that they were not sufficiently prone to self-deception, Asahara and his entourage lost their residual faith in humankind. Like a Nazi ideologue, Asahara claimed that while killing animals was wrong, because they are innocent by definition, human beings, who commit crimes intentionally, should not be spared when they stood in the way of the greater good (Lifton, 1999).
In keeping with this misanthropic tenet, the acolytes of the charismatic leader developed sophisticated techniques for mass-killing and stored weapons and high technology designed to support their plan to annihilate the Japanese government. On June 27, 1994 they carried out the first bio-terrorist attack in history, in Matsumoto, causing a death-toll of seven and injuring hundreds of people. On March 20, 1995, their most infamous action: the assault of Tokyo’s subway network. The terrorists riddled with the tip of their umbrellas several bags filled with sarin gas, but the number of victims was comparatively low thanks to the presence of mind of some travelers who opened the windows and dispersed the gas. On both occasions, a more careful planning and execution would have caused a catastrophe.

The psychology of terrorism

Following the terrorist attack, the celebrated Japanese novelist Haruki Murakami interviewed some of the followers of Aum-Shinrikyo and revealed traits of their personalities that warrant a closer examination (Murakami, 2001). When he was an adolescent, Hiroyuki Kano, an Aum member who was not involved in the attack, was driven by the urge to attain superior knowledge, but nobody seemed to be able to help him fulfill this wish. He spent hours pondering over the most vexed existential questions without reading through a single book, for he did not like reading: “When I read something I just see what’s wrong with the book.” Although he was primarily interested in finding a mathematical demonstration of the soundness of Buddhist philosophy, he conceded that he never got into depth with any study of Buddhism, as “the ones I read didn’t seem very direct in their approach. I couldn’t discover the remedy I was searching for.” When he met the Aum instructors, he was delighted to see that all his questions were answered: “We were told: ‘do this and this will happen.’ No matter what question we had, we got an answer straight away. I was completely immersed in it.”
Another member, Akio Namimura, pointed out that Fumihiro Jôyû, the sect’s spokesman, “could answer any question clearly,” and Mitsuharu Inaba recalls that he was really impressed by what Jôyû said: “It was so clearly stated – the way he used metaphors, for instance…after the sermon he took questions, and his answers were extremely precise, each one perfectly tailored to the person who asked it.” Their lives were greatly improved as they freed themselves from the burden of their responsibilities. For Harumi Iwakura, the way Aum did things made life easier: “they’d give the order and you just did what they said. No need to think for yourself, or worry about every little detail, just do what you’re told.”
These young people were manifestly unprepared to take responsibility for their own action and to grasp the gravity of what they were doing. They candidly pointed out the simplicity of the choices they made, and the eagerness to completely surrender their critical faculties, without spending too much time on considering the morality of their actions. The sort of morally and intellectually numbed people that Dostoevsky’s Grand Inquisitor argued he was morally obliged to guide (Dostoevsky, 1912). Those who joined the sect did so in order to withdraw from reality, shut out their fears and misgivings, for they were already estranged from real life. They wanted someone else to cope with the problems of their own lives. For them, relinquishing critical thought, systematized ideas, and ethical concerns in exchange for protection and support was a matter of course.
As a result of their moral obliquity, these cultists thought little or nothing of their victims. A hermetically sealed milieu, dominated by reductionism, narcissism and self-centeredness, disabled their moral faculties. Their absolute moral certainty prevented them from becoming aware of the wickedness of their behavior. The scope of their endeavor was so absolute that they were drawn into a parallel, suspended reality, in which their previous nagging duties and concerns could be ignored, and all norms and conventions were turned upside down: hence their disinclination to accept that they should feel guilty about what they had done. Social order and conventional morality were perverted to such an extent that the boundary between right and wrong completely dissolved, while adepts’ self-denial came very close to self-imposed mind-control.
Their atrophied morality, which was in stark contrast to their fervid imagination, was further exacerbated by a deterministic view of the effects of karmic influence on one’s personal life. They were persuaded that the negative consequences of past misdeeds could only be counteracted by escaping from the bonds of karma through meditation (karuma kara no dasshutsu) or overturning deleterious social institutions and conventions that had caused what they saw as widespread spiritual degeneration. By living in a sick and corrupted society, people accumulated a large amount of bad karma that, like a genetic burden, would affect them for the rest of their lives, and possibly beyond. Therefore, Aum preached positive spiritual cleansing through ascetic practices at the same time that it called for the annihilation and the subsequent regeneration of Japanese society.
But too few Japanese were eager to follow this path of spiritual cleansing through meditation. According to Asahara’s understanding of tantric Buddhism, these millions of skeptics were unworthy of life. They deserved a “compassionate” death, which would ultimately accelerate their cosmic journey of reincarnation. Additionally, to take the life of people who represented an obstacle for those engaged in the reduction of bad karma in the world was actually a meritorious act. Thus, Aum-Shinrikyo was not amoral or ethically indifferent: it rather embraced an inverted ethical system that was both “primitive” and “modern.” Asahara’s philosophy tapped into the deepest, ungovernable recesses of the human mind, but it also affirmed its determination to demonstrate that humankind, not God, is in charge of the future, and that happiness and spiritual fulfillment can be achieved in this life and in this world.